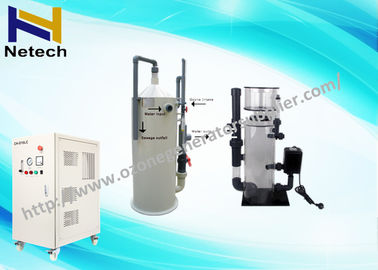 Protein skimmers extract dissolved organic waste products (proteins) from the aquarium by mechanically removing them through foam fractionation. Efficient skimmers remove proteins before they breakdown and pollute the water. Skimming enhances the quality of the aquarium’s environment as well as its appearance.

◆    Protein skimming removes certain organic compounds, including proteins and amino acids, by using the polarity of the protein itself. Due to their intrinsic charge, water-borne proteins are attracted to the air/water interface. Protein skimmers works by injecting numerous tiny bubbles into the water column. The small bubbles present an enormous air/water interface for the protein molecules to cling to. The longer the bubble resides in the water, the more proteins it is able to attract. The action of a protein skimmer is often compared to the action of waves producing sea foam.
◆    Besides removing proteins, our skimmers also removes other substances such as fats and fatty acids, carbohydrates, metals such as copper complexed with proteins, and certain trace elements such as iodide, in addition to particulates and other detritus, phytoplankton, and bacteria.
◆    Increasing the dissolved oxygen in water, for improving the biological treatment efficiency.
◆   Removing the harmful air in water, stabilize the PH in water.
◆   Mixing ozone in water also has the function of clean, clean ion and remove algae in water.
◆   Although copper and other metals can be removed through protein skimming, the element is attached to organic molecules, and then removed with the organic. Oil molecules (fats) can cause skimmer foam to collapse, handicapping its efficiency to produce a dry foam.

2.It can use with the ozone generator for fish farm RAS system

Our products are sold all over the world, you can rest assured.

描述 描述
Get a Quote